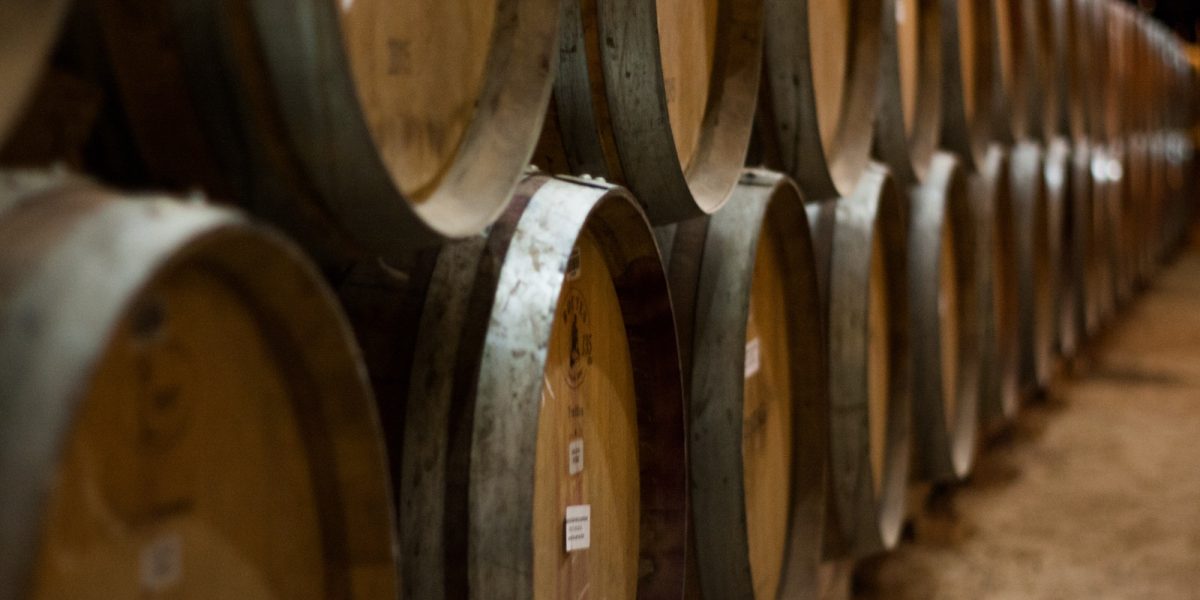 Lee Hedgmon, a distiller at Freeland Spirits, greets me warmly. She’s wearing a mask but I can tell from her eyes that she’s smiling. We’re inside the craft distillery, a gorgeous brick building painted a dark teal color, and she leads me down a narrow hallway, past a sign painted on the wall that reads, “Spirits are about celebration.” I’m glad now that Hedgmon considered my comfort before even meeting me; she emailed me earlier in the day to let me know that the production area where we will be sitting is cold, and I should dress warmly. She holds a Topo Chico seltzer she never sips from in the hour and a half we spend together (again, the masks) and we get right into it.

Before leaving for graduate school at University of Minnesota where she would pursue a PhD in Feminist Studies, Hedgmon helped her friend home brew. “When I say ‘help’, that is a euphemism for, ‘I stood around and drank and watched him make beer’,” Hedgmom says. But during graduate school, she got more seriously into brewing beer, mead, and wine. Hedgmon returned to her hometown to teach at Portland State and finish her degree, and concurrently joined the local homebrew club. She was nearly finished with her dissertation when she realized her heart wasn’t in it. “I said, I think I would rather be a brewer.”

When I ask if she considers distilling to be more of a creative or a technical pursuit, Hedgmon, answers without skipping a beat. “I always tell people it’s part science, part magic,” she says. She worked at several breweries before she landed her first distilling job at McMenamins’ Edgefield. There, she was able to hone her skills in part by working on a 125-year-old still lacking modern bells and whistles, including a thermometer. This forced her to rely on her sense of smell, taste, and touch. ”I was surprised by how accurate everything was, but also how accurate the human body is. I still put my hands on everything and I still smell and taste everything because I could tell based off where the heat was on the condenser, how cold or hot the distillate was coming off the still, whether or not I had to make adjustments. And you only have your body, your taste. This definitely impressed on me the art part of it,” she says.

Hedgmon is not afraid to let herself exist in the gray area, to occupy two modes of being that may seem disparate to someone who isn’t looking hard enough. She is at once friendly and open while not afraid to challenge people on their beliefs. “As a brewer, I was surprised they even let me talk to people [on tours] because I just couldn’t let some things slide,” she says, laughing. Whether it’s embracing both science and art, or later when she stresses how important it is for newcomers to the industry to both self-educate and find the people who will show them the ropes, there’s never a contradiction in her thinking but instead a fluidity to the way her mind works. Nothing is all or nothing, but both. I sense that Hedgmon’s willingness to embrace two ideas at once, to resist being boxed into a role or type, is central to her success. She later tells me that she thinks her work as an interdisciplinary scholar has allowed her to think nonlinearly, to see the ways her skills may be applicable in other industries (for example, her knowledge of fermentation was crucial when Freeland began canning cocktails).

She is driven to make spirits and the distillation process accessible to those who don’t know the ins and out of the industry. “You can use a lot of big words to explain things, but if nobody understands those, what use is it? You can say that something is phenolic but then you say bacon and they’re like, yes, I like smokey! If you can’t make the connection that somebody can understand, all they’re going to think is that you’re kind of a pretentious.”

I get to see her practice this later when she takes me on a tour of the production area of Freeland where three distinct types of gin are made: Freeland Gin, Dry, and Geneva, plus two canned gin cocktails and a bourbon which is sourced, then hand-blended and further aged in Elk’s Cove Pinot Noir barrels. Explaining the distillation process to me, the novice with a recording device, she describes how little alcohol is actually produced in the distillation process versus how much product goes in, and when I say the first, potentially over-simplified thing that comes to mind, it sounds like cooking spinach, she claps her hands together and her eyes widen with what can only be described as joy. “That’s exactly it,” she says, making me feel at ease, that I’m getting it.

As she talks, I find myself crunching numbers in my head to figure out just how she gets so much done in a day. In addition to her work with Freeland, she has a barrel-aged honey company, The Barreled Bee. Drawing on her love of bees and experience with barrels, she ages honey in barrels for months for a final product whose deep flavors vary by batch. The taste of honey, she explains, depends not just on the type of flower but where that specific flower is located. “Honey is a snapshot of a place in time,” she says.

Freeland Spirits is an all womxn team made up of Freeland founder and CEO, Jill Kuehler, master distiller Molly Troupe, Hedgmon, and a handful of others. When I ask if she often thinks about the fact that she works with all women, Hedgmon says, “I think about it all the time.We look at the world and we mark it through the lens that we are familiar with. And we’re familiar with being women in a world that doesn’t think we drink or should. ”

At times in her career, she’s sat inconspicuously at the bar, observing as patrons tasted her drinks. Occasionally when a customer was really raving about the drink, the bartender would mention that the brewer was right here, and often when they then saw Hedgmon sitting there, their tune would change, the glowing review turned to criticism. It was good, but… Sometimes she would say something in return: If I had been a man, would you have just continued glowing about that?

“It’s such a shock to have somebody call you on it that you either have to stop and think about what it is you just said and whether or not it would have been different. It wasn’t about being confrontational. It was about [pointing out] biases that they may not have been aware. People needed to see that there was somebody who wasn’t a white bearded man doing these things in order to recognize the fact that it’s a possibility.”

“You pick your battles,” she says. People constantly compliment Hedgmon on her IPAs, which she does not make. They’re mistaking her for Annie Johnson, a Black woman who is a brewer on the West Coast. The pair do not look alike.

When asked what’s the hardest thing about breaking into the industry, she tells me that distilling is particularly hard because they are typically owner-operated. “There isn’t a lot of room or places to get in, to learn the craft, to be able to [take what you’ve learned] and go somewhere else, which is why we started a [paid] internship program specifically for entry-level women.” She adds that it’s important to know the basics of how to clean a tank, your way around a still, maybe even how to run a forklift. If the distillery just needs to teach you the specifics of how they do things, “that’s going to give you one more leg up than having them hire their cousin,” she says with a laugh.

Later, we find ourselves talking about zodiac signs as one does when your conversation with a relative stranger (though by this time I feel like I’ve known her) surpasses the hour mark. Again she exists at the intersection: born on the cusp of Capricorn and Aquarius, she says the tension between the two signs is central to her life. There’s the pragmatic Capricorn and then the Aquarius with its lofty goals.“The Aquarius part of me has these great ideas.  The Capricorn part of me goes, yeah, that’d be a good idea… for the future, and the Aquarius goes, we should do that tomorrow.”

Imagining some sort of angel and devil situation on each shoulder, I ask her which side wins. “The Capricorn part of me says, I guess I’m going to make that shit work.”

How to Incorporate E-commerce into your Distillery’s Marketing Plan